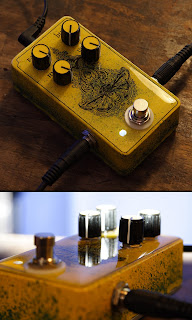 You should check out Scott's stuff (at mtl assembly). he makes rad effects too and his bitcrushers are way more versatile than mine! face-melting boxes galore!
Posted by cloudscapes at 6:37 PM

Kinda sorta really want one of these to "replace" my bitrman. That clip is super dirty. :D

I'd love a Voetsek too! haha

oh the bitrman is still much more versatile.

haha no voetsek. that's an absolute horrid pedal to build. wouldn't do it for $400 even.

yeah the Voetsek looks beyond ridiculous...

congrats on the review!

great review and even greater is the news that there could be hollow earths on the horizon.
i want one in the worst way.

great, i'm looking forward to the moth. hope i can get one in time.

you do ship worldwide i hope?

yep worldwide is no problem. but it'll be regular post. (its the same locally). I can't deal with UPS/FedEx due to general douchebaggery.

yeah i know what you mean about UPS et al