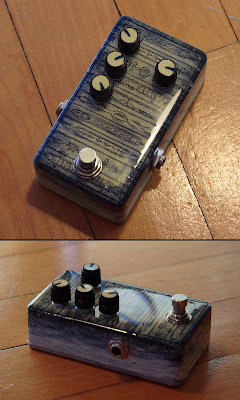 Posted by cloudscapes at 4:08 AM No comments:

the Tremulus Lune is a popular DIY tremolo design. I've already bought the one with speed modulation straight from 4ms (who are an awesome company with awesome philosophies), but sometimes I need a minimal one that doesn't take up the space of 4 regular-sized pedals. hence I made this. 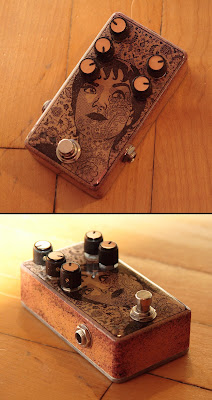 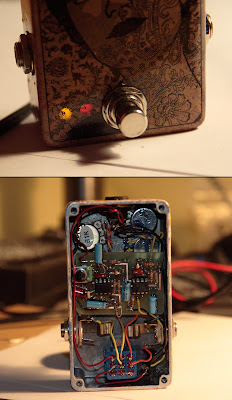 two LEDs. the red one is bypass LED, and the yellow one blinks the shape and speed of the trem (even when bypassed). the LEDs are *under* the finish too, so it's quite seamless!

commonsound layout. the gain pot is inside because I have no use for that when playing. I have it set as very slightly louder than bypassed, to make up for the dips in the trem modulation. I accidentally etched the PCB backwards, and was too lazy to re-etch it. so I just populated everyhting on the "wrong" side of the PCB.

I drew the girl. the patterns were "found". paints are acrylics and mostly painted on with a toothbrush. everything coated with clear epoxy resin.
Posted by cloudscapes at 10:42 PM 2 comments: