drone box. it's a synth, basically. designed to make walls of tones and drones!

not really based on any existing circuit. it's a bunch of simple ideas that will all be wired together in weird ways. at first it was going to be pseudo-modular but decided I'd rather mess with well-planned switching and relays instead. here's how it basically functions:

6 oscillators each with a wide frequency range, fine-tuning and triangle-square shape control. sub brings the range down to literally pulsating textures (less than 1hz in frequency). the highest is ear-shattering/borderline off human-hearing. each oscillator can independantly and selectivly be pitch-modulated by either of the two sequencers. each sequencer can be hard-synched or independant. portamento blends the steps so that they flow more naturally if wanted. either sequencer can be set to loop or to be triggered. if triggered, it stops after the eighth step. each oscillator can be independantly panned (left to right) and mixed to a final stereo mix for potentially wicked awesome stereo soundscapes! the final stereo mix volume can be modulated by either of the two sequencers as well.

a bit of technical info: oscillators are opamp based. I use tl072s. sequencers are just 4017s. I use vactrols to modulate stuff around.
Posted by cloudscapes at 7:51 PM 1 comment:

Some people have asked for a guide for that insane 16-step tremolo I built. Here's an archive with the guide as well as PCB transfers in 600dpi. I'll be the first to admit that this circuit needs some tweaks and could be much better! I'm learning about this stuff, and I'll make a better one sometime.

Posted by cloudscapes at 7:16 AM 3 comments:

Built a Cacophonator for someone. Needless to say, I'm going to miss it! 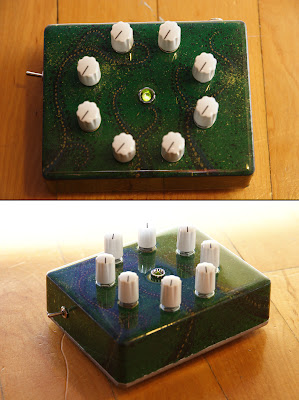 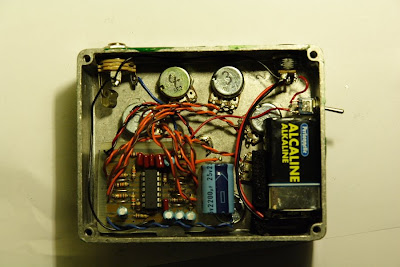 Posted by cloudscapes at 8:02 PM 3 comments:

In the last few years, effect-making has rapidly become a near-obsession of mine! Because I had been posting these personal creations in various places on the internet, people were starting to take genuine interest. This blog is an effort to keep them informed of any custom jobs or short runs I might make, and to keep me organized.

I'm by no means an expert. This is relitavelly new to me! My builds are still a mess inside, and I frequently annoy pros on how to do this-and-that's. I am getting better though, and I think I've gotten up to a level where I'm confident enough to build a few, sell, and not worry too much about the reliability or robustability of the paintwork.

A familly photo of those I've made. Doesn't include the ones I later dismantled for parts. 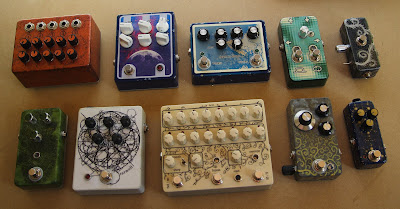 A lot are based heavily off existing designs and were excersises in making them look pretty or understanding how they work. Others (top-left, top-center, top-right, bottom-second and third) are original designs. I'm most likely to make a batch of the ringmod (white with all the circles) for those interested, as well as several little feedback loopers like the one at top-right.

I'll update this blog with ideas, finds, prototypes, samples and others' works of interest!
Posted by cloudscapes at 7:46 AM 2 comments: