I posted the video sample and details of that Hollow Earth pedal I built a couple weeks ago on about 5 forums. It went slightly viral on a few others thanks to a few users. Anyways, interest in it has been a little overwhelming! So much so that I've convinced myself that I should build a batch of revisions of this to spread around.

Things I'd like to add/change:
-Eight to ten presets, all overwritable with your own shapes
(with LED digit display)
-Expression-in for the shaping
-Expression-out to "shape" other effects
-Rugged footswitch for record instead of the flimsy button
-Random mode
-Triggered envelope mode
-Sample input as waveshape
(the last one is a biiiig maybe)

After a 10-day break from this stuff to play jams/gigs, I started tinkering again. I got random mode mostly working, and I've started the preset saving bit. 8 pin DIP 24LC eeproms are a wonder!
Posted by cloudscapes at 8:01 PM 13 comments:

Posted by cloudscapes at 2:36 PM No comments: 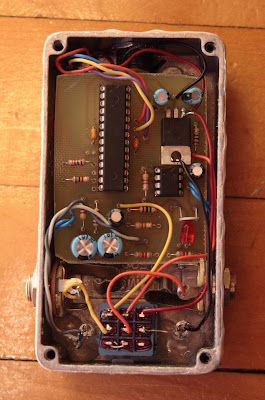 You know that feature the Goatkeeper has? Waveshaping? "design" your own LFO and then use that as a trem? Yeah, that. But a bit more!

Hold down the "record" pushbutton, "draw" out an LFO/envilope shape with the "shape" knob (it can be several seconds long), and release the button for it to start looping the shape and modulate the volume of whatever instrument you have plugged through it. AKA "tremolo". Push button again to design a new one. [U]Or[/U]! Or toggle "punch-in" switch to edit the existing shape with whatever you feel! "smotheness" knob makes it smooth if the waveshape sampling feels a bit too steppy/aliased. It happens if you sample at a very slow tempo and keep it very slow. "speed" accelerates or decelerates the LFO. I forget what "volume" does.

Two LEDs on either side of the bypass switch (under the decals/finish). The one on the right follows your wave "drawing" as well as when it's looping. "firmware upgradeable"

If there's one thing I'm really bad at, really really really bad at, when it comes to electronics, it's control logic. The little bits that need specific timing, when to do such thing and when not to do it, if voltage dips below X then do so-and-so, etc, that kind of crap. Using traditional logic chips, I just can't get my head around it. Ever. I've also been wanting to integrate more automation in my synths/pedals. Thus, easy to program AVR microcontrollers have been interesting me as of late.

Here is the kit I've just purchased (thing on the left): 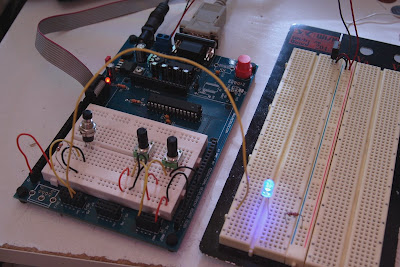 I did a lot of Basic programming in school. QBasic, Visual Basic, etc. It's pretty easy stuff compared to assembly or even C. Microcontrollers at first seemed daunting to me because I wasn't prepared to learn any good language, but then I found out that these little AVR chips can be programmed from a Basic environment called BASCOM! It took me a few days to get serial com to work (had to go out and buy a serial PCI card, the USB-to-serial adapter I had was rubbish, I found out days later). Once I was up and running though, it was pretty easy to get basic things going. Blinking lights, input, potentiometer reading (ADC) and PWM (sPitting out Waves that I can use for Modulation or whatever).

The little project in the photo is something I started today. It's one push-button, two potentiometers and a LED, all hooked up to the programmer. I got it so that pushing the button will make the MCU go into "record mode", where it will record pot-twisting for up to several seconds (one byte per sample at 60 sampels a second). As soon as I let go of the button, or if the severa lsecond limit runs out, it loops the recorded twisting which can be observed through the LED! The other pot can adjust the speed of playback/record.

This opens up all sorts of fun additions to effects! I could for instance "record" a certain knob on a delay or synth, and have it automatically loop! Exciting stuff! Once content with my program, pop the chip out of the programmer (that long chip in the center) and stick it in my own circuit. Done!

They make smaller chips. I'll get different sizes depending on how I need them.
Posted by cloudscapes at 4:53 PM 1 comment: